With 1.4 billion people logging into Facebook every day, it has helped franchises across the world become lead generation powerhouses. This guide will walk you through step by step on how you can use Facebook’s advertising for franchise development and lead generation activities.

Any good franchise development campaign starts with a plan and a thorough understanding of what exactly the campaign will do, how you’ll measure its success, who you’ll be targeting and what resources you’ll need.

The first step in this process is understanding what your goal is and how your Facebook advertising helps you achieve it. If we’re talking about franchise development, your goal is most likely to acquire more franchisees which means Facebook’s role will be to acquire and help nurture these leads into franchisees.

Once you understand your goals, you now need to identify which metrics to track. Using our example from above of acquiring new franchisees you would want to follow metrics such as:

Know Who Your Perfect Franchisee Is With Personas

Now that you have an understanding of what your goals are and which metrics to track, you now need to figure out who you’re going to be targeting. Understanding who your perfect franchisee is can be the difference between an aggressive expansion and a nothing happening.

That’s why you want to create a persona for each of the different types of franchisees that you have. There is already a library of guides on how to create a detailed persona such as Buffer’s, Shopify’s, and Hubspot’s but, I’ll give you a few extra hacks that we use to collect information when building personas out for other franchises.

Thankfully, Facebook has a handy tool called Audience Insights which allows you to drill down into different audiences to gain a deeper understanding of who they are.

For example in the screenshot below, we can see the types of people who are interested McDonald’s as a brand:

Let’s take a look a look at a couple of audiences that you may have readily available through Facebook’s Pixel or Facebook’s Custom Audience feature.

When going through each of these audiences be sure to take note of key traits that each group has as you’ll be using them to create your own saved audiences later on. These traits should include demographic data such as age, gender, education to household data such as income, ownership and purchase data.

Understanding people who don’t become franchisees is just as important as people who do become one. With the help of surveys and exit intent technology such as Qualaroo and Hotjar, you can prompt visitors who are leaving the page to answer a quick poll or one question survey to gain a better understanding of why they are leaving.

If you’re using marketing automation to warm up would be franchisees and you see that they aren’t moving to the next stage of your funnel, send them a quick survey asking them what’s preventing them from continuing forward.

Armed with this information you can gain a better understanding of why people aren’t converting and incorporate it into your marketing material such as ads, emails, and landing pages.

Asking a lead to become a franchisee is like asking to marry someone once you meet them, it’s not going to happen. You need to go on a couple dates first, develop a personal relationship built on trust and then pop the question. That’s exactly what your franchise development funnel should do.

Your franchise development funnel should be a multi-step process that takes a lead from knowing little to nothing about your brand to becoming a franchisee. Funnels typically have three steps depending on the likelihood of a person completing the entire funnel, there are a variety of ways to name each step such as ToFu, MoFu, and BoFu or Awareness, Consideration and Decision but, I like to keep things simple and use temperatures (cold, warm and hot). The hotter or lower the person is in your funnel, the more likely they are to become a franchisee.

So how do you move someone from cold to hot and ready to become a franchisee?

Well, that depends on the person. Using the franchise personas that you created in the previous step, you’re going to want to create a funnel for each of them. At each section of your funnel, you need to address a set of questions, concerns, and problems to warm people up and move them to the next step.

Let’s take a look at an example:

We can see in the screenshot that our persona College Grad Greg wants to start a business and become financially independent but, has some hesitations and frustrations about starting one such as this persona not being sure if a franchise is right for them along with being unsure about the type of support they will receive from the franchisor.

Armed with this information, you can now turn it into a funnel that will move people who match College Grad Greg’s persona from warm to hot. You can see an example of pieces of content for each temperature level below:

The sky is the limit in terms of what you offer at each temperature but, here are a few starting points to give you some inspiration:

With the use of Facebook’s pixel and audience targeting, we’re able to turn unknown visitors into ad audiences that we can show our ads to.

Now that you have your franchise development funnel all planned out, where do you start? Which personas do you prioritize?

The trick is to start from at the end and work your way to the front. Meaning start with prioritizing people who are most likely to become franchises and then move on to your colder audiences.

Here’s what your priority of audiences should look like:

Custom audience is any visitor that you’ve already interacted with and have data on which includes anything from their name, address, phone number and email to as simple as know they have visited your website. You can see the different types of custom audiences that Facebook allows you to use: 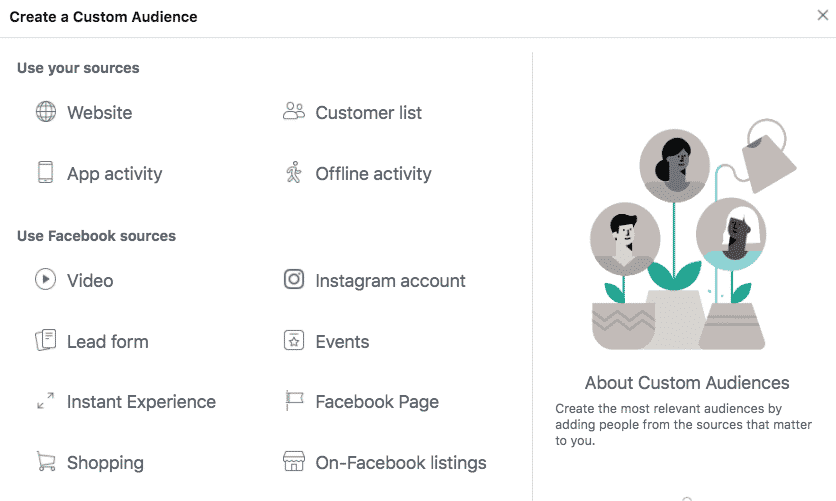 Based on this information, you’re able to send them targeted ads to have them move into the next step of your franchise development sales funnel.

A perfect example of this is targeting people who have submitted their email for your franchise development newsletter or someone who has signed up for a webinar. You can then target these people with Facebook Ads to apply to become a franchisee or to have a call with one of your team members.

This helps ensure that you’re being as efficient with your advertising dollars as possible with your franchise lead generation campaigns.

Below you can see an example of how Facebook allows you to create a look-a-like audience using a custom audience you already have set up.

You are able to set how similar a look-a-like audience is, I recommend creating at least 3 per custom audience that are 1%, 3% and 5% in similarity.

The last and final audience that you should be targeting with the least amount of priority is what Facebook calls Saved Audiences. These are audiences that have never interacted with you or your franchise in the past and are being shown ads strictly based on demographic, interest or behavioural signals. As you can see from the screenshot below, there are a wide range of options when it comes to configuring your saved audiences: 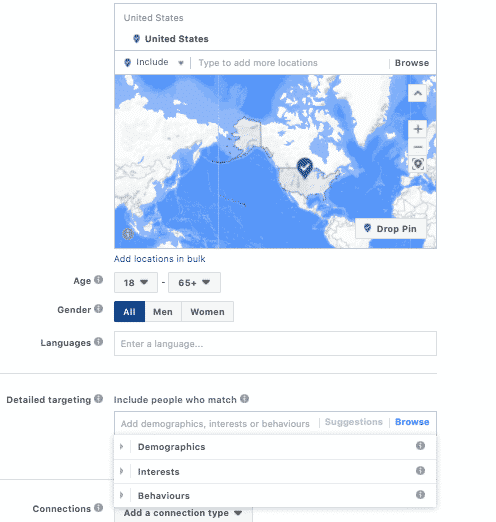 The reason why you use the Saved Audiences as last is because these people may not even be in the may not be qualified, or many not be in the market for a franchise. As a result, this audience it the least likely to convert into a lead and franchise applicant which is why you want to take advantage of all of your low hanging fruit as soon as possible.

Now that you have your audiences all figured out, the next step is to actually launch your franchise lead generation campaign. This involves several different key areas which are:

The landing pages as the name suggests is where your people are going to end up on your site once they click on one of your ads.

One of the biggest mistakes that I see in any franchise lead generation campaign whether it’s on Facebook, Instagram or Google Ads is franchises sending paid traffic to their home page or any other public facing page on their website. The reason why this is a huge no-no is that you’re paying valuable money to send potential franchise leads to your website and if they go to your public facing site, they are very likely to get distracted with the various links and calls to actions through it.

Instead, you should be creating dedicated landing pages that is solely focused on converting a visitor into a franchise lead where this page is only accessible through your Facebook Ads campaign. You can see an example of one here by Tutor is Easy: 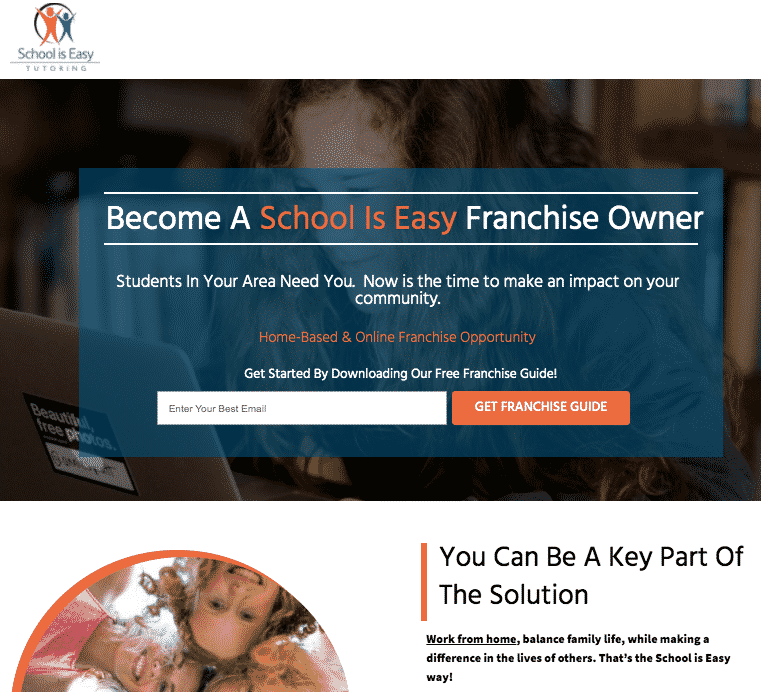 Each campaign that you launch on Facebook’s Ad platform should focus on driving a single goal for the audiences being targeted in it. The reason for this is it allows you to more accurately track performance across your lead generation campaign, shift budget from one goal to another, pause campaigns that are performing poorly and more.

You would then have a Facebook Ads campaign for each of those steps listed above, prompting people to go from one step to the next. This helps you create a funnel that ensures you have a steady stream of franchise leads going to your sales department.

Within each of your campaigns, you’ll have multiple ad sets, these are essentially groups of ads that share settings for how, when and where to run. In order to ensure that you have a clear understanding of what is working and what isn’t you’ll want to follow the rule of “one audience, one ad set” which as the saying suggest for each ad set you have you should only have one audience.

For example, in our Newsletter Signup campaign we could have individual ad sets for people who have visited our website and are a 1% look-a-like to our current franchisees. As we start to accumulate data, we’ll be able to see which audience performs better and as a result move budget from the poor performing ad set to the well performing one.

The last part of launch your franchise lead generation campaign on Facebook is creating your ads. Facebook has a wide range of different ad types based on the type of media (picture or video), device (desktop, tablet, phone), platform (Facebook or Instagram) and much more. You can find a complete list of them here.

The key here is matching what you are offering (newsletter signup, webinar, application start, discovery day, etc…) with the various different ad types that Facebook offers along with where the person is in your sales funnel. For example if someone is lower in the funnel (i.e. about to apply to become a franchisee) then more in-depth and informational ads should be shown and can be a perfect time to use video. On the other hand, if we want to get people to sign up for a webinar then a lead generation would do the trick.

The last and final step is to finally launch your campaign after all that hard work but, don’t think the work is over just yet. Facebook Ads and PPC for franchises isn’t a set it and forget it marketing channel, it requires continuous work using the data that you collect to make tweaks and optimizations in order to improve performance. 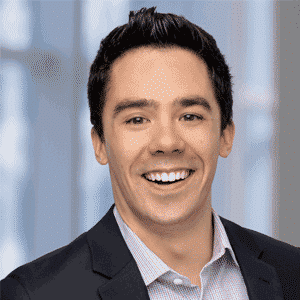 Jordan is Kogneta's Managing Partner and leads all thing strategy and growth. He's worked with a wide range of companies from small mom and pop restaurants to international franchises helping them grow by triple digits.

Need Local Marketing Without Being Burned?